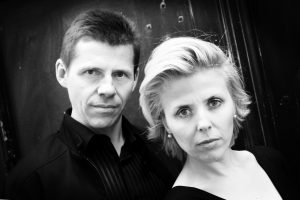 In this respect they are regularly invited by the Mozarteum Argentino, Banco Republica Colombia, the Lima Philharmonic Society and many other organizations.

The couple gave numerous recitals in Japan, China, USA, Vietnam, Brazil, Libya, UK, Romania, Croatia, Spain, Greece, Belgium, France with a great success. Clara and Thierry are also invited by  international music festivals such as « Festival Croisements » (China) , the Suona Francese Festival (Italy), the Enesco Festival (Bucharest, Romania). Prize winners of international competitions (1st Grand Prix of the Cleveland International Piano Competition USA for Thierry Huillet. 1st Grand Prix of the J-S. Bach International Violin Competition for Clara Cernat). They are inseparable in life and on stage. Their CDs and DVDs have been warmly reviewed by the critics. Actually Thierry Huillet leads, in parallel with his career as a concert pianist, a major career as a composer.

Clara Cernat & Thierry Huillet feature their own version of the mythical Romanian song « The Lark » (« Ciocârlia). This melody was played for the first time in 1889 at the Universal Exposition in Paris, for the inauguration of the Eiffel Tower. It was composed by the famous Romanian musician Angheluş Dinicu. He won the Gold Medal on June 29th, 1889, at the International Minstrels Competition in Paris. This version was composed in 2020 by Romanian violinist Clara Cernat and French pianist and composer Thierry Huillet.

Share This
We use cookies to ensure that we give you the best experience on our website. If you continue to use this site we will assume that you are happy with it.OkPrivacy policy