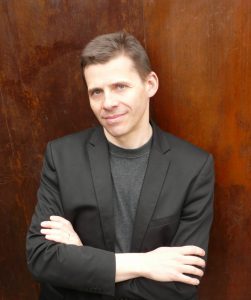 Thierry Huillet won 1st Prize at the 1987 Cleveland International Piano Competition. He was also a prizewinner at the prestigious Busoni Competition and Tokyo Competition.

Thierry Huillet has enjoyed a celebrated career, highlighted by international prizes, appearances in the most prestigious halls, critical success as a performer-composer, and an acclaimed permanent duet with violinist Clara Cernat (www.pianoviolon.com), internationally recognized through their concert schedule and successful CD recordings.

As a soloist, he was invited to perform with numerous orchestras, including the Cleveland Orchestra, RAI Orchestra and many others. In 2010 and 2011, he has toured in China, Japan, USA, England, Scotland, France, Spain, Belgium, Argentina, Brazil, Romania, Czech Republic, Portugal, Greece, Vietnam, Libya, Croatia, Paraguay.

Numerous broadcasts have been dedicated to Thierry Huillet as a composer, as well as complete concert evenings and CDs. Thierry Huillet is a distinguished teacher and jurist in international competitions, senior professor at the Toulouse Conservatoire, France.

RELEASES
You love our artists, like our Facebook page!
Facebook
Copyright LELIA PRODUCTIONS - All Rights Reserved
Back To Top
We use cookies to ensure that we give you the best experience on our website. If you continue to use this site we will assume that you are happy with it.Ok